Before Christmas completely consumes news feeds across the world, we thought instead of inundating you with ‘the best Christmas themed tech gifts’ content (that’s for next week), we’d first take a peek at the more important things that have happened in the world of tech this week. So, put the decaying office tinsel down and terabyte out of the latest tech news.

That’s right, this week the golden skinned Commander and Chief was seen on Fox News alongside Apple CEO, Tim Cook touring a ‘’new Apple manufacturing plant’’. The reason for the sarcastic quotation marks is that no such manufacturing plant has been built, at least not a visible one. Trump confirmed in a tweet ‘Today I opened a major Apple Manufacturing plant in Texas that will bring high paying jobs back to America. Today Nancy Pelosi closed Congress because she doesn’t care about American Workers!’ Apple have recently built a new campus in Austin, but that is for the design aspect of their production, mainly employing a limited number of highly skilled white colour professionals. Maybe Trump was too embroiled in sparking another political debate to notice.

The political debate gets dirty

Earlier this week Labour leader Jeremy Corbyn and PM Boris Johnson went head to head in a live political debate.  During the debate a mystery ‘fact checking’ Twitter account appeared from nowhere and blasted out counter facts to everything Corbyn said, at a pace that almost seemed telepathic. This had people scratching their heads over who or what this account was and why it was churning out these facts. However, the mystery was finally revealed when some eagle-eyed user discovered the Twitter handle belonging to the factcheckUK account was @CCHQPress, the Tories PR arm. Childish or brilliant? We’ll let you decide.

We look at how social media is changing the political landscape

Earlier this week we looked at the ways social media has shaped politics over the last decade. From scandal and controversy to clever viral campaigns and reengaging the youth. Read more about that here.

This week Elon Musk gave the world it’s first view of Tesla’s brand new electric pick-up truck. The ‘cybertruck’ can travel for 500 miles without needing to charge its batteries and apparently comes with bullet-proof windows. During the live unveiling Musk invited a guest to test out the durability of the windows. The guest proceeds to throw a small object at the side window of the cybertruck, which results in a rather large smash and one very red-faced billionaire. 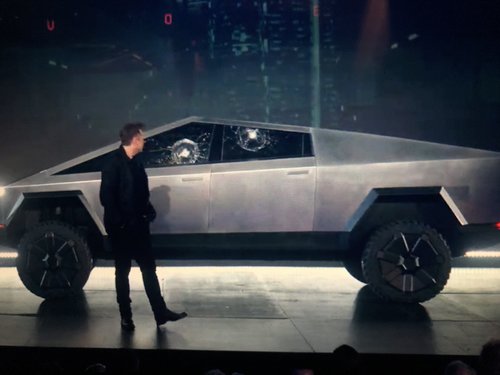